Ways to Get Your Child To Memorize Multiplication Facts

Multiplication and Addition Facts Have to be Memorized

Hold on, hold on, you CAN make practicing multiplication and addition facts MORE FUN!

For example, you can:

When to Memorize Facts

It’s SO important that your child is able to say his or her addition and multiplication facts without hesitation so that the child will have an easier time with other concepts such as fractions, going back and forth between decimals and fractions, exponents, and the list goes on.

If your child does not memorize these facts, he has a small chance of being able to master higher level maths such as Algebra.

When I was helping my daughter to memorize her multiplication facts, I told her she needed to say them as fast as she said her name when asked.

Do speed drills.  Write out a list of facts, and have your child answer as many as possible in an allotted time.   The child’s goal is to get faster over time.  To make this process a little more fun, use a sand timer.

Call out the facts to your child.  If there is a particular fact the child is missing, go over that fact over and over again.  The child should NOT be recalculating the fact each time it is called out.  They need to memorize the fact.

If your child is in a play or drama, how do they memorize his or her lines?  They look at them intensely and study them right?  Well, this is also a technique that can be used to memorize multiplication and addition facts.  Write down some facts, and let the child STUDY them until they are memorized.

What to do If Your Child is REALLY Struggling

If your child is REALLY struggling, I suggest taking about 3 facts at a time, and just to concentrate on those 3 facts.  Spend some days JUST going over those facts until your child REALLY has them down.  Once they have mastered those 3 facts, then move on to another 3 facts.

Make Sure Your Child Truly Understands the Concept Before Memorizing Facts

Before you work on memorization, make sure the child truly understands the concept of addition or multiplication.  When explaining addition, this is a great time to introduce the child to the number line.  You can make it fun by pretending to jump from one number to the next on an imaginary number line.

When you first introduce addition to a child, using some type of manipulatives, such as blocks, so the child can visually see you adding objects is usually very helpful.

How to Make Memorizing Fun

You shouldn’t always have to reward your kids for learning, but this is one time that rewarding them with some type of treat can really pay off.  Check out my free gift to you, some really cool stationary your kids can use to write down their math facts.  After your child has checked off that he knows each fact, you can give them a small treat.

Also, playing games is a fun way to help your child learn his or her addition or multiplication facts.  I made up a game, Little Entrepreneur that teaches your kids some of the ins and outs of owning his own business while also having the younger kids practice their addition/subtraction facts and the older kids their multiplication division facts.  The first child to purchase all the items he needs to open his business wins! Check out this game here.

Another way to have your kids practice their addition facts AND have them to review continents and oceans is the game BUMP All Around the World.  If your kids are like mine, they’ll enjoy bumping opponents off spaces!

For another fun way to have your kids practice their math facts, check out my blog post about Playing Math Ninja. The set up for this game is easy, so make sure you check out this game.

There are many techniques that you can use to help your child memorize these facts.  Don’t worry if the memorization doesn’t happen over night.  Just make sure it happens! 🙂 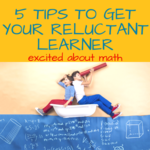