Quick, what’s 8+6?  Or how about 9+4?  Optimally, you want your kids to know their addition and multiplication facts as quickly as they can say their names.  You don’t want them to hesitate when asked one of their math facts.  And you especially don’t want them to always have to rely on counting on their figures to do addition.  Of course, counting on their figures is ok when they are FIRST getting the hang of addition.  My son, Andre`, who is in 1st grade still counts on his figures sometimes, BUT my goal for him is to VERY soon be able to stop doing this.  He has already memorized some of his addition facts, and we are currently working on him being able to memorize more of the facts.  The way to get your kids to be able to say their math facts very quickly is through a LOT of PRACTICE.  So, I decided to play a game with my kids, primarily so that Andre` could practice some of his addition facts. 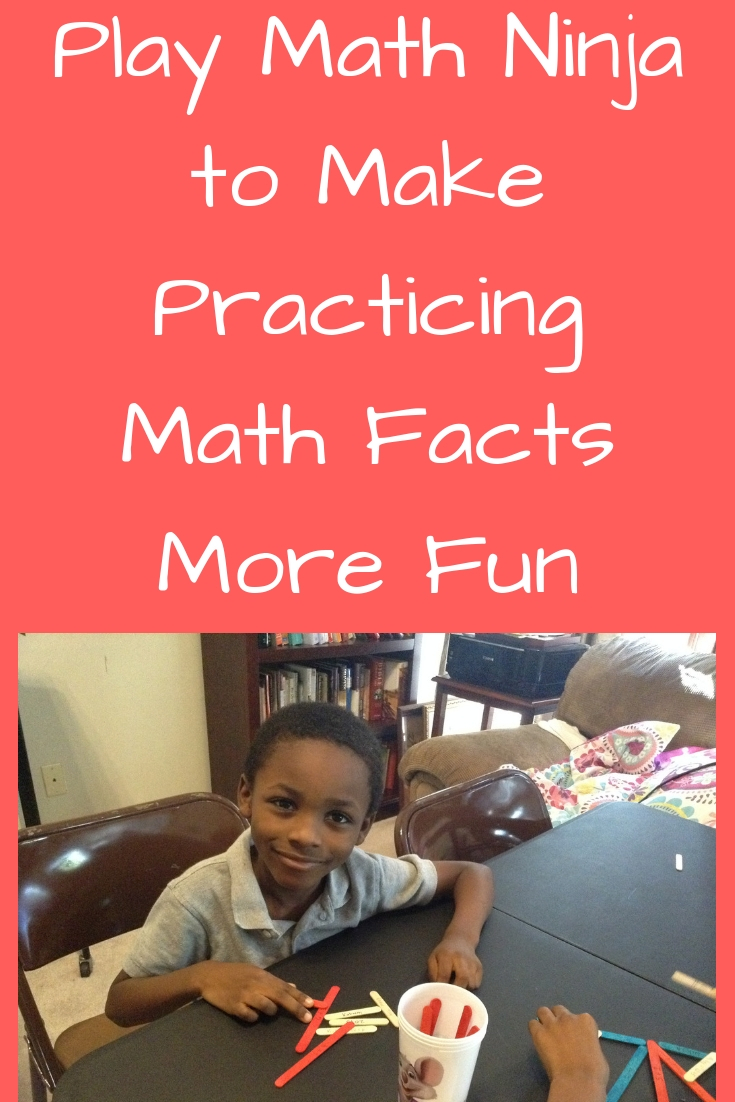 Math Ninja Game: a Modified Version of the Game Kaboom

On Pinterest, I came across a blog called The Star Spangled Planner, and she talked about this game Kaboom.  I modified the game Kaboom and decided to call it Math Ninja.  To play this game, you just need some popsicle sticks, a cup to place the sticks in , and a marker or pen to use to write on the sticks.

For my son Andre`, I wanted to practice some of his addition facts.  For Annaliese, I wanted to have her practice her 12 time tables, add unlike fractions, reduce fractions, and go back and forth between improper fractions and mixed numbers.  So on one side of the popsicle sticks, I wrote addition facts, and on the other sides of the sticks, I wrote 12 time table facts and problems involving fractions.  Some of the sticks you will want to reserve and not write any math facts on them.  On these reserved sticks write the word Kaboom on some of the sticks, and the word Math Ninja on the other reserved sticks.  All of the sticks are then placed in the cup.

How to Play Math Ninja

Players take turn drawing sticks.  If the player pulls a stick with a math fact on it, he is to answer the question.  If he correctly answers the question then he keeps the stick. A math stick counts for 1 point.  If the player gets the question wrong, the stick is placed back in the cup.  The player with the most points at the end of the game wins.  The Math Ninja sticks are special in that they are worth 5 points each, so they can really help to boost the player’s score.  Now here is where it gets interesting.  If a player pulls a Kaboom stick, that means trouble, and it will cost him 5 points.  He has to put 5 points back into the cup if he gets a Kaboom stick.  If he has a Math Ninja stick, one of those sticks should be placed back into the cup and is up for grabs again.  If the player doesn’t have any Math Ninja sticks, then he must put 5 of his math fact sticks back into the cup for the 5 points.  If the player doesn’t have at least 5 points available to put back in the cup, he can just put back in as many points as he has available.  When a Kaboom stick is drawn, it should be set aside and not placed back in the cup.  The game is over when there are no more sticks to be drawn from the cup.

The kids have played Math Ninja several times.  After playing it the first time, Andre` asked to play it again.  The last time they played it, it was cool, when he was excited about getting a math fact correct (8+8) after having had to put it back on an earlier turn for not knowing it. I like the game because it allows me to have both kids practice math at the same time even though they are doing two totally different things.

There’s just no getting around having our kids practice math facts to get them to memorize them.  Figuring out fun ways for them to practice the facts can help to take some of the frustration out of the process.  And you can smile, when your 1st grader ASKS to play a game where he has to PRACTICE MATH!  I mean come on, who doesn’t want to be a MATH NINJA?!!

Interested in having your kids taking some ownership of learning their multiplication facts?  Stay tuned for Math Boss!